Bleep bleep bleep the alarm goes at 4am on Saturday the 5th December 2009!!

Noting the darkness, I grumble at the bleeping that has awakened me. Slowly I remembered why I had set the alarm clock soooo early. I was getting up to see Angkor Wat at dawn, a task done by many visitors to Siem Reap every day, however, this morning was different! The first weekend of December hails the popular Angkor marathon and bike ride which brings many tourists to experience the temples in a different way. And this year I, along with Sangkheum Center’s Young Adults and Educators were participating.

‘I give hope to young generation’

The day before I had checked my bike, washed it down and entered all participants ready and raring to go on behalf of all HOPE supporters. We had twenty in total from Sangkheum Center, plus Thomas (London to Brighton HOPE fundraiser in July), Dayvy (my cycling partner and motivator throughout the course), Samnieng (last year participant who came 14th in the overall men’s race – London 2012 here we come!!) Natasha (fellow expat) and Mr. Kunn (Jasmine Lodge guesthouse owner and Project Manager for My Grandfather’s House).

Having proudly sewed the HOPE logo on my basket the night before (which I may add did receive many a comment ‘nice basket!!’), I pinned the number 99 to my Sangkheum T-shirt which as I mentioned before signifies that “I give hope to young generation” aptly missed ‘A’. Slightly ironic as the initial hope I gave to Sangkheum was indeed teaching them the English language!! All set, Dayvy picked us up by car, dumping the bikes in a tuk tuk! (Motorised transport ) summonsing up the energy to cycle 30km, I was lacking the motivation to do a further 8km just to get to the starting point. On the way we passed hundreds on bikes making their way to the temples, we arrived relatively fresh and ready to go!! However, after the race refuelled by a chocolate brownie from Blue Pumpkin I quite happily raced back to town afterwards.

On arrival to the temples, we met the Sangkheum team who were pinning their lucky numbers to their new race t-shirts. They were all very excited and full of energy. The boys were all teasing who was the best and who would win from their team. Bota was determined he would be first having trained closely alongside Samnieng and Thomas for the last few months. His training also saw him running from town to Sangkheum Center which is 12kms from town.

All lined up for the big annual bike ride

As we lined up at the starting point the sun was beginning to rise over the wondrous Angkor Wat and the reality and emotions hit that we were actually here. We raised over 1,000GBP and had given a goal for the young adults to work towards. It had been months since they all chorused they wanted to do a sponsored cycle and today their wish had come true. They had trained every Sunday as group cycling around the temples, Tonle Sap Lake and back to the center for several months and were now all lined up at the starting point for the big annual bike ride….

On the off everyone pushed off as hard as they could, but Dayvy and I took it slow taking everything in. From Angkor Wat to the gates leading to Angkor Thom up to Bayon, past the Elephant Terrace and across the big circuit to Sras Song. Passing Sras Song I knew the hard part was over and stopped for some refreshments. Being one of the last ones (I admit it) there were no bananas left!! At this stage I was in need of energy, but no matter we still carried on.

We passed green padding fields as the mist rose clearing to be a beautiful day. The weather and temperature had been perfect and we were relieved when the sun stayed cool. We passed the finish line 2 hours later to the cheers of the others. They had been patiently waiting for us for an hour!! They had raced very hard and some had done very good times within the hour. Motivated by their efforts they are already talking about where they will come in next year’s race and if they continue training every Sunday from now they will definitely be in the top twenty. So, I say good luck to them and well done for working so hard for their achievements. They truly were cycling for their own futures and like with everything they do they accomplished it as a team, with determination and with a great big smile.

HOPE is a UK-based charity with the mission to give the children of Cambodia a childhood and the young adults of Cambodia a better future, through play, education and development, in order to harness opportunity and positive change. This blog post was also published on HOPE’s website. 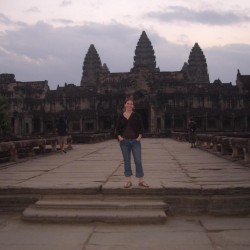 Jo Hansen
Business Development Manager at Mekong Experiences
With more than 20 years of experience from the tourism and hospitality sector, Jo completed a Masters in Responsible Tourism Management at Leeds Metropolitan University in 2009, firmly cementing her values in promoting sustainable development. Drawing heavily upon her sales, marketing and events experience within hotels, she works passionately with projects and organisations on a grassroots level in Cambodia to build bridges between poverty alleviation and tourism.